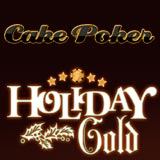 The Sunday Special is a $100K guaranteed tournament which takes place every Sunday at 8pm GMT. Win a $500 bounty prize for eliminating a pro in the Pro Bounty Edition.

Players can qualify for the Irish Poker Open 2013 by playing the daily satellite tournaments or weekly finals.

Daily satellites are running, qualify for your seat for a fraction of the buy-in.

Qualify for the Irish Poker Open 2013, win a $4,000 prize package to one of the longest running live poker tournaments in Europe. Travel to Ireland for the Main Event which takes place at The Burlington Hotel between 19 March - 1 April 2013.

Satellites start from as little as $3, the weekly final offers at least one guaranteed prize package for more information see the Irish Poker Open 2013 page.

CakePoker offer one of the biggest online poker deposit bonuses, make a first deposit and get a 200% bonus up to $2,000.

The pending bonus can be cleared by playing cash games or tournaments, the bonus is released in $5 increments for every 83.33 frequent player points (FPPs) earned.

Players have 90 days to complete their entire CakePoker pending bonus.