CarbonPoker March Madness promotion is an interesting new concept where player can win cash prizes up to $16,500 for earning VIP points. Earn VIP points by playing cash games, SNG or tournaments once you have earned the required amount of points per level, you will be able to pick one of five basketball hoops to shoot for. Behind every hoop is a prize, by picking the correct hoop your cash prize value will increase and so will your CarbonPoker bankroll.

Players who sign-up and use the Carbon Poker bonus code 600PK will get a special 300% deposit bonus up to $600 which is bigger than the initial deposit bonus they offer online read our Carbon Poker Review to find out more. CarbonPoker accept deposits from US players and have many deposit options to choose from, Carbon Poker minimum deposit $10

Play at CarbonPoker during March 2010 and you could win up to $500 daily in the March Madness promotion. There are 10 different levels to unlock cash prizes while you play poker online, when you reach a new level you will get a chance to shoot the ball through one of the five hoops. All the hoops have a cash prize hidden behind them, some have bigger bonuses than others, as you work your way up in levels the prize values increase.

See the table below for the cash prizes you can win at each level during the March Madness promotion. The cash prizes are randomly hidden behind each hoop and doesn't require any basketball skills to unlock them. 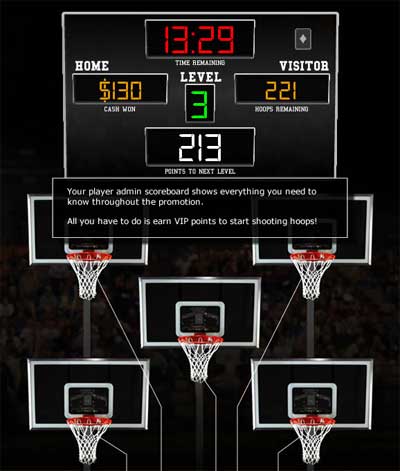 The CarbonPoker March Madness promo takes place from the 1st - 31st March 2010. Players will have only one pick per level to win their cash prize, only 10 levels can be unlocked per day which can be done daily throughout the promotion. The cash prizes will be added to your bankroll within twenty minutes of unlocking a new level. Carbon Poker VIP points can be earned by playing real money games which include Carbon Poker tournaments, ring games and SNG games.

Cash prizes can be used to play poker on CarbonPoker but cannot be cashed out until ten days after it has been released into your Carbon Poker bankroll. CarbonPoker are very strict on players colluding or trying to cheat on their tables during promotions, any player caught doing so will risk having their account closed and entire funds confiscated.