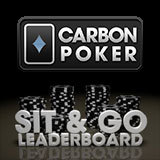 Every month players can win their share of $25,000 in the Carbon Poker Sit & Go Leaderboard promotion.

Players earn 1 leaderboard point for every SNG game played based on the stake level: micro, low, mid or high stakes. The leaderboards run for two weeks giving players the chance to win cash prizes twice during each month.

The Carbon Poker Maximus VI series is scheduled to take place from 8-22 September with more than $3 million in guaranteed tournament prize pools.

Rank in the leaderboards to win your share of $25,000 every month playing SNG games on CarbonPoker. Any 6-9 seat sit-n-go game ranging from micro to high stakes qualifies for the promotion.

Play more games to rank higher in the leaderboards for cash prizes, players earn 1 point for every game played. The Carbon Poker Sit & Go Leaderboard runs for twice every month from 1st-15th and 16th till the end of the month.

The reload bonus code is only valid with deposits made between 27th August up until 15th September 2013. Players must earn 150 VIP for each $1 of the bonus, the bonus is released in $5 increments.

Players must opt-in to activate the promotion by logging into the CarbonPoker software and clicking on Promotions then Sit & Go Boost.

The Poker Maximus VI features 85 poker tournaments with more than $3 million guaranteed, players can buy-in directly or qualify in the daily satellite tournaments which start from as low as $0.21.

See the full Carbon Poker Maximus VI schedule for dates and times of the events, the series runs from 8-22 September 2013 on CarbonPoker or AcedPoker.