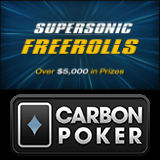 The Carbon Poker Supersonic Freerolls will run daily in September with more than $5,000 in Supersonic Sit & Go tournament coupons to be won.

The fast paced SNG games are the latest edition to the CarbonPoker software, the 4-Max SNG's are even faster than hyper-turbo tournaments and blinds increase every two minutes.

Supersonic Freerolls are free to enter for all registered players including new players that sign-up, no deposit required.

Also running this September is the Carbon Poker Finish Line Freeroll where players can qualify for their entry to a $25k freeroll.

The new Supersonic poker format is jam packed with action, the fast-paced SNG games feature four players on each table and blinds that increase every 2 minutes.

Carbon Poker Supersonic Freerolls offer players the chance to win coupons for free which can be used to try out the new poker format.

New players can join for free and win their share of the prize this September by completing the following steps:

The top 100 players in the Supersonic Freerolls will all win tournament coupons ranging from $1.10 to $11 based on their finishing position in the tournament, the coupons can be used to play the Supersonic Sit & Go's

The Carbon Poker Supersonic Sit & Go games are a unique format which is even faster that the regular hyper turbo tournaments and includes the following features which speeds up the game dramatically.

Heads-up Supersonic Sit & Go games are also available, the only difference being players are up against one opponent and starting stacks are 1,500 chips instead of 300.