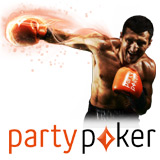 The Carl Froch $100K Challenge features a $95K prize pool with a bounty prize of $5,000 for knocking out Carl Froch from the tournament.

Qualify for the Carl Froch poker tournament by earning leaderboard points between 9th November until 6th December, 2015. The top 99 places on the leaderboard will be entered into the tournament to play poker online against the boxing legend.

There will also be a prize draw running with over $25,000 in tournament tickets to be won, get your entry into the draw by playing at least one Power Series tournament.

Party Poker players have the opportunity to play an exclusive bounty poker tournament featuring boxing legend Carl Froch. The special tournament is limited to only 99 players that qualify through the leaderboard promotion.

Play the Carl Froch $100K Challenge tournament with a $5,000 bounty on Carl Froch and a $95,000 guaranteed prize pool. The Party Poker promotion is to celebrate the new poker tournament schedule which is known as the Power Series that was launched recently.

The Carl Froch Challenge tournament is limited to the top 99 raking players in the leaderboard, earn points for the leaderboard by playing the new Power Series tournaments between 9th November - 6th December.

All qualifying players will received a cash prize with payouts ranging from $450 up to $10,000 for first place prize.

During the promotional date players can get entries into the $25,000 lucky draw promotion where there is over $25,000 in Party Poker tournament tickets to be won. Play at least one Power series tourney between 9th November - 6th December to get your ticket into the draw.

Prizes for the draw are tournament tickets with values ranging between $2.20 up to $1,050, the draw takes place on 7th December.

All winners of the prize draw will be notified by email.