CarbonPoker's Bad Beat Jackpot is currently sitting around $997,000 and is still climbing steadily. If the bad beat jackpot does not get hit soon it could reach over $1million in the next hours/days.

This may soon be the world record for the largest Bad Beat Jackpot amount from any poker room currently online. Players who play at bad beat table at Carbon Poker within in the 24 hours that it reaches the million dollar mark will get free access to Bad Beat Jackpot Freeroll tournament which has a $1000 prize pool.

Carbon Poker will also host special Bad Beat Sit N Go tournaments which will run for 24 hours after the $1million jackpot has been reached. 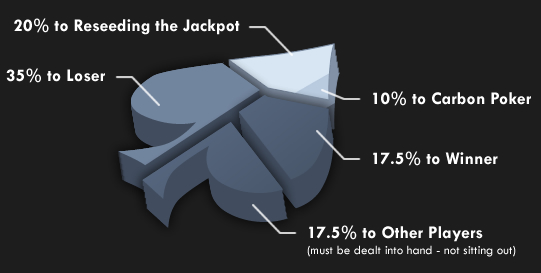 CarbonPoker is a fair new online poker room which has generated a lot of interest, they accept US poker players and offer a decent variety of poker games. Carbon Poker offer freerolls to both real money and non depositing players.

Use Carbon Poker bonus code 600PK when depositing to get your 300% up to $600 Plus you will get access to a $1,000 freeroll including entry into the $500 Freerolls for the following 14 days. Freeroll Tournaments, Royal Flush Bonus, Carbon Poker Comp Points.