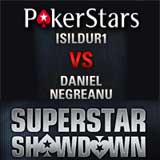 Download Pokerstars for free and watch KidPoker vs Isildur1 from the rail, get a 100% welcome bonus up to $600 when making your first deposit.

These gripping multi-tabling heads-up poker matches will take place online at PokerStars on 20 & 27 March 2011 @ 15:00 ET. Watch KidPoker vs Isildur1 battle it out on the virtual felt in the PokerStars Superstar Showdown. Both players will multi-table four tables with $150,000 bankrolls playing $50/$100 stakes NL Holdem Poker.

Download PokerStars and watch this event from the rail, get 100% bonus up to $600 when making a first deposit.

Contenders must multi-table four Omaha or NL Holdem cash games playing stakes of $50/$100 or more over 2,500 hands. The winner is the player who shows the most profit after the session and gets the other players bankroll, in this case with KidPoker verses Isildur1 who will both be bringing $150,000 to the table.

Players must use the auto-rebuy feature to reload a minimum stack of 100bb until the player's bankroll has insufficient funds in which case they must leave that table.

The online qualifier can keep his remaining bankroll after the session is finished, an extra $10,000 will be added for a knockout prize for the player who manages to defeat their opponent by winning their entire bankroll before 2,500 hands have been completed.

Download Pokerstars and qualify for your seat to the SuperStar Showdown. These events can be found in the PokerStars lobby by clicking on ‘Tourney’ then ‘All’.