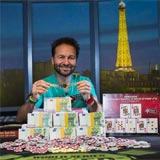 Daniel Negreanu wins 6th WSOP Bracelet and the Player of the Year title in the final event of the Europe series, 2013 WSOP Europe High Roller Event.

Negreanu just needed to make the final table of the High Roller Event to claim his 2013 POY title and managed to win the tournament and his 2nd WSOP bracelet for 2013.

This is Negreanu's second WSOP player of the Year title, his previous title was won in 2004 a decade ago.

Negreanu started out on the final table with the lowest chip stack and found himself head-ups verses Brazilian player, Nicolau Villa-Lobos.

Daniel Negreanu is now the first poker player to win a bracelet at all three major WSOP series, USA, Europe and Australia.

Executive Director of the World Series of Poker, Ty Steward asked Daniel which meant more to him, the Player of the year title or his 6th gold bracelet. Negreanu responded that he was so far behind Hellmuth in bracelet wins that he preferred the title of two times player of the year titles to Hellmuth's zero.

Negreanu comments: "I honestly felt like I was going to win [the event] the whole time, the thing was I played the Main Event earlier and I sat with 10-15 big blinds the whole tournament. I was fighting it, but I ended up getting knocked out 25th. Then I thought to myself, 8BB's? How are they gonna knock me out again?' And once I doubled up and was at about 20BB's. Once I was back in the mix and I doubled up again, I saw the faces, I saw the people looking around. I could sense it and I felt like, here it is, my opportunity to win this thing. "

Making the final table of the High roller event put Negreanu in first place on the 2013 WSOP Player of the Year leaderboard ahead of Matthew Ashton.

"I gotta be honest with you, Player of the Year is a big a deal to me and it is a goal of mine every year. I'm going to win bracelets, I know that. I'm grateful to have six now, which puts me back in the race in terms of all-time, but Player of the Year, to win that twice when no one else has ever done that really just cements me belonging where I always felt I did--at the top of poker."

More final table action will be available soon when the November Nine return for the 2013 WSOP Main Event final table on 4-5 November.