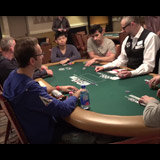 Daniel Negreanu WSOP Bracelet Bet 2017 - with six bracelets in his collection Negreanu has made a side-bet with Ben Lamb to win three bracelets at the 2017 WSOP.

Negreanu claims the bet will give him motivation to succeed and get results, although it will be almost impossible to achieve.

In his latest video blog Negreanu gives some insight into his preparation for the series, his trailer and a football match. KidPoker is already running good on the final table of Event 2 $10,000 Tag Team tournament with team mates Eric Wasserson, David Benyamine and Mark Gregorich.

888Poker Download - official sponsors of the World Series of Poker

If Team Negreanu wins the Tag Team Championship, his 25k fantasy team gets a major score since he has all four players on his team.

Daniel Negreanu‏ - Offering a team bet: I'll bet that either Jason Mercier or me wins a bracelet this summer and will take 1.20 odds