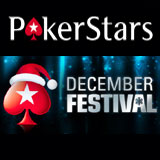 The December Festival is coming to PokerStars with more than $27 million in cash on the line in several promotions and tournaments.

PokerStars will be adding extra value to the Sunday Majors tournaments, random cash prizes on SNG tables, prizes for milestone poker hands and special edition of the PokerStars WCOOP series.

All the action of the PokerStars December Festival takes place between 1-22 December giving players the chance to win more in their Christmas holidays.

New players get a PokerStars Free $20 sign-up bonus plus access to the $100k Privilege Freerolls for 31 days.

Join in on all the festivities at the PokerStars December Festival where players can get their piece of more than $27 million during the promotional dates.

There is something for everyone with cash game, tournament and SNG promotions running at all stake levels, don't miss your chance to win big at PokerStars.

Get the software installed and start play any of the following promotions running from 1-22 December.

PokerStars will host double the amount of Sunday Major tournaments offering players the chance to win twice in the biggest guaranteed tournaments on the very first day of the promotion.

The PokerStars Double Vision Sunday tournaments will run during the following times:

A special edition of the PokerStars Sunday Majors tournaments will run on the 8 & 15 December, Pokerstars will be increasing the regular guaranteed prize pools for the Sunday Million and Sunday Storm.

Half a million in cash prizes will be issued randomly to players seated at the SNG tables during the first week of the promotion 2-8 December.

SNG players can win up to five time their buy-in back and the prize pool increased up to five times to the original amount if the tournament is selected as a lucky Golden SNG.

Players can take on the challenge in the PokerStars December Festival Mission, players must use a star code to opt-in for their mission, earn the required amount of points to win a ticket to an all-in poker tournament.

The Pokerstars missions will run fro 9-15 December, qualifying players will be issued their ticket to a tournament where every player is all-in until

Cash game players can get their share of $700k while seated at the tables when a milestone poker hand is hit. The promotion kicks off on 16 December and runs until 300 million poker hands have been dealt.

Last but definitely not least is a special edition of the WCOOP Series where there is $10 million in guaranteed prize pools to be won in 8 tournaments running from 20-22 December.

As a bonus prize for the winner of each event will receive a PokerStars Money Clip and a free tournament ticket to the 2014 WCOOP Main Event valued at $5,200.

Download PokerStars and register for these events in the lobby for your share of the prize pools.