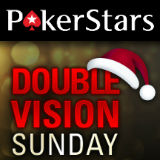 The Double Vision Sunday PokerStars tournaments will feature four events that will run twice at the same time on 21 December offering over $3.8 million in guaranteed prize pools.

This is one of the many poker promotions that make up the PokerStars December Festival this holiday season and adds up to a total of $15 million to be won.

The only difference between the two tournaments is the amount of players seated at the tables being 6-Max or 9-Max tables.

For Sunday only in December, the Double Vision Sunday PokerStars tournaments will offer twice the amount of value than it normally does. There will be two versions of the tournaments running as 6-max and 9-max tables both offering the same guarantees, buy-in and also taking places at the same time.

Download PokerStars - Get a $20 FreePlay bonus when signing up as a new player.

Play for more than $15 million in cash in the PokerStars December Festival which include a bunch of great poker promotion this holiday season at PokerStars. The promotions conclude with a $5 million guaranteed PokerStars Sunday Million on the 28th December.

Buy-in directly or play the daily satellite tournaments which start from just $1 on PokerStars.