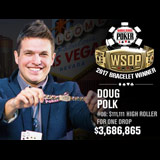 Polk admits to making the mistake of being staked in the tournament with only 43% of his winnings earned of the total first place prize of $3,686,865.

The field of 103 players was tough with Polk verse Elky heads-up for the bracelet and a sidebet of a hairstyle change for the loser of the heads-up match.

The outspoken poker video blogger has uploaded a few videos of his progress to the final table including an interview and poker hand analysis with Bertrand Grospellier verses Phil Hellmuth.

Doug Polk has won his third WSOP bracelet in the $111,111 One Drop High Roller event defeating afield of 103 players including Elky to win the title.

"Instead of grinding poker and studying and grinding, my focus is now more on the training, the marketing, the promotion and that side of poker, I still play the higher stakes stuff because I know in the events I'm a winning player. So, I get a unique opportunity to take videos or stream it online or vlog stuff because I'm still winning in these events, while also doing that." Doug Polk

888Poker Download - official sponsors of the World Series of Poker

I have some good news and some bad news. The good news is that I'll be playing at the final table in the World Series of Poker One Drop with $3.7 million up top. The bad news is that I'm down on my luck and have only 43% of myself. I'm sorry that I let you all down. Anyway, I had a chat with Jeff Gross and Bertrand "Elky" Grospellier about his epic hand against Phil Hellmuth.

Going into the heads-up match for the title against Elky the two made a sidebet that the looser of the match will change their hairstyle for a week.

After defeating Bertran Grospellier, who now has to have a faux hawk for the rest of the week. Had Polk lost he would have to had changed his hair color to blonde.

Elky was the chipleader going into the final table but Polk manage to comeback from short stack in 5th place to take the victory.