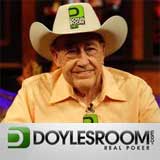 Last week the Legendary DoylesRoom.com was seized by the FBI in another effort to prevent USA Poker players from playing poker online. This may well be the end of the popular online poker room which players have supported since 2004.

The online poker room was endorsed by Doyle Brunson who is World Renowned as The Godfather of Poker, Doyle Brunson also known as Texas Dolly stepped down as the Doyles Room representative just a week before the FBI seized the domain name.

While so many rumors have been circulating throughout the years that Doyle Brunson is dead, it certainly seems that in this case DoylesRoom is Dead. R.I.P

Doyle Brunson has played live poker professionally for more than 50 years and won 10 World Series of Poker bracelets throughout the years, he is also a great author of several poker instructional books the most popular being the Doyle Brunson's Super System and more recently his life biography entitled The Godfather of Poker.

Doyle Brunson also appears on several big name poker TV shows where he represented DoylesRoom while playing high stakes poker games on TV against some of the best players in the World, these shows included: High Stakes Poker and PokerStars Big Game.

Following the Black Friday incident in April 2011, the FBI seized the DoylesRoom.com website on 26th May 2011 just a week after Doyle Brunson decided to resign as the poker room representative. DoylesRoom will most probably be shut down for good as it would probably need to re-brand the entire name and no longer allow USA Poker players to play poker online.

Throughout the years DoylesRoom has seen many network changes moving from:

Personally I believe their recent decision to move to the Yatahay Network was a bad move, choosing a lesser known network to replace the popular Cake Poker Network. The Yatahay Network software seems so much more inferior to the Cake Poker software, which also shares it's network with Cake Poker, Victory Poker and Unabomber Poker (Phil Laak) which still accept USA Poker Players excepting for VictoryPoker who have made a decision to wait until the US Poker industry is licensed and regulated. USA Poker players can still play poker online at selected online poker sites read our USA Poker Room Reviews.

You can still support Doyle Brunson by purchasing his educational poker books where you can pick up some valuable tips on how to master the game of poker.