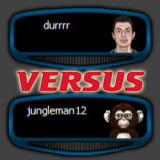 The 2nd Durrrr challenge is underway with Durrrr vs Jungleman12, this latest challenge will be completed much faster than the Patrik Antonius game because both players will be playing more than six tables at once.

The first session kicked off with 5,862 hands already being played, so far Daniel Cates (Jungleman12) is in the lead beating Tom Dwan by more than half a million dollars.

The players will run the hands twice for the entire challenge, they must also addon if their stacks fall below 75 big blinds and can leave the table if they have more than 250 big blinds.

Daniel Cates started playing poker online at Full Tilt Poker, he began playing $0.25/$0.50 Heads-up No Limit holdem and managed to increase in limits and made more than $100k in his first year. By 2009 he was playing $25/$50 and made more than a million dollars online using strict poker bankroll management.

While the first challenge with Tom Dwan versus Patrik Antonius has not yet completed, Durrrr is currently in good position to win with about 10,000 hands remaining with Durrrr in the lead by more than $2 million. The first durrrr challenge has taken more than 18 months probably because both players are in a different time zone and Patrik Antonius has never really been a multitable player.