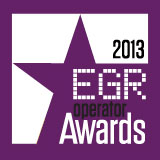 The eGR Operator Awards 2013 took place at The Roundhouse in London on 25th November, the awards ceremony rewards excellence in e-Gaming each year.

888Poker has won Best Poker Operator for three consecutive years at the EGR awards and will no doubt be celebrating their achievements in the online gaming industry.

More than 700 online gaming operators were included in the nominations with awards given out for several categories including: poker, casino, sportsbetting, bingo, mobile products and many more.

The annual awards returned for the ninth edition to reward operators for their contributions to online gaming, the best operators will flaunt their awards on their websites and gain customer trust knowing that these companies are the best in their gaming sectors.

888 have achieved the most notable positions taking down the award for both poker and casino, they have also managed to get their software into the USA regulated poker markets in states Nevada, Delaware and New Jersey.

888 is the official software provider for the WSOP online products in 2013, released as WSOP New Jersey, WSOP Nevada and 888 Delaware.

These USA poker sites are the biggest contenders in their states and have adhered to the strict gambling regulations to receive their license to operate.

The winners of the 2013 eGR Operator Awards in each category are listed below: