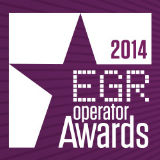 The eGR Operator Awards 2014 took place on November 24th at The Roundhouse in London for the 10th edition of award ceremony for the gaming industry.

Best Poker Operator 2014 was awarded to PokerStars this year and 888poker failed to retain the title for the forth consecutive year running.

Major categories at the awards include: Affiliate of the year, Bingo operator, Casino operator, Mobile operator, Operator of the year and the prestigious Poker operator award for best online poker site.

PokerStars under the new ownership of Amaya Gaming, have secured one of the most renowned awards in the gaming industry at the eGR Operator Awards 2014.

The eGR award ceremony consists of several categories in online gaming and is attended by all the major operators in those sectors.

Game of the year - Immersive Roulette by Evolution Gaming

Evolution Gaming provides their software to several top online casinos with games available on 888casino, PartyCasino and The Rational Group.

View all the results and categories from the eGR Operator Awards 2014 here - egroperatorawards.com