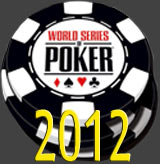 ESPN have added the 2012 WSOP TV schedule for their broadcast of this years main event. Norman Chad and Lon McEachern will once again form the coverage commentary team along with Kara Scott covering the action from the floor.

The final table feed broadcast will be delayed by 15 minutes to ensure fairness to the finalists.

This year ESPN have added The Big One for One Drop series and the WSOP Circuit National Championship to the broadcast lineup in the three weeks prior to the main event, both series will be shown on ESPN and ESPN3.

Those looking to watch live streaming tables from the 2012 WSOP will be pleased to know that WSOP.com will stream 60 World Series of Poker Final Tables Online with a five minute delay without hole cards for more information about 2012 WSOP Live web stream.

The TV broadcast by ESPN of the 2012 WSOP is sure to bring hours of entertainment for poker fans around the world with the proven commentary team and live final main event table broadcast even with a 15 minute delay will surely be another home run.

Those looking to get a bit of live coverage of the WSOP 2012 would best be served by watching the live stream web broadcasts brought to you by WSOP.com.