PokerStars European Poker Tour Berlin, the biggest poker tournament hosted in Germany was interrupted on day 4 by armed robbers, causing chaos in the casino as people rushed for the exits. Footage of the robbery was recorded from EPT live and was released briefly on youtube before the video was removed. Luckily nobody was hurt and the incident only lasted 15 minutes, while the robbers held up the registration area of the EPT at Grand Hyatt Hotel.

The main event which was down to the final 20 players resumed a few hours later and one other EPT event was canceled, when players were allowed refunds. Lets hope stricter security is used in future live tournament events where large sums of money are involved.

American player Kevin MacPhee won the main event after winning his seat from a PokerStars satellite. PokerStars guaranteed a €1,000,000 for the winner of the EPT Berlin event.

Kevin MacPhee won seats to 14 EPT events this season through PokerStars qualifying satellites this is the first time he had a big cash in an EPT event. PokerStars is the worlds biggest poker room they sponsor all the top poker pros and live poker events.

Yesterday at approximately 14:15, an armed robbery took place at the European Poker Tour (EPT) event in Berlin. Nobody was seriously injured. Four armed men were involved in the robbery which targeted the tournament registration desk outside the tournament area.

No shots were fired and the suspects quickly fled after a security guard intervened. The police investigation so far has shown that the suspects had a handgun and a machete. Contrary to tabloid reports, no Kalashnikov assault rifles or hand grenades were used. The suspects did not enter the tournament area and the money taken was substantially less than what has been reported. 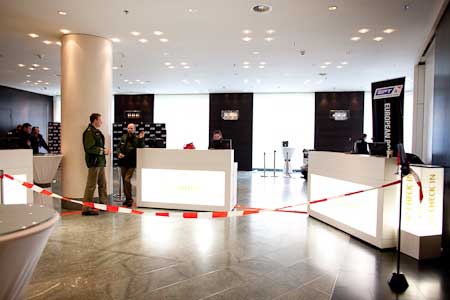 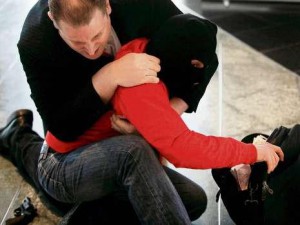 Photo released in a German Newspaper