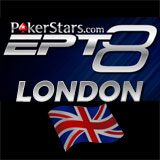 Start playing for your prize package online at PokerStars, there are daily satellite tournaments running where players can buy-in for cash or use their FPP to register.

Make your first deposit at PokerStars and get a 100% match of your deposited amount as a bonus up to $600, minimum deposit is just $10.

The European Poker Tour Season 8 stops off in the UK for the EPT London between 30 September - 6 October 2011 at the Hilton Metropole. Players can win their share of the prize pool plus a huge payday and an EPT title for first place.

Win a EPT London prize package on PokerStars where there are daily satellite tournaments available with guaranteed prize packages and also included amongst the satellites are PokerStars Women Live freeroll tournaments and qualifiers running exclusively for female players. So come on ladies stop playing online bingo and play these PokerStars freerolls to win your seat for free.

Registration for EPT satellites are open to European & UK poker players and every other country excepting the USA. Win a EPT prize package and play one of the biggest live poker tournaments in the UK, prize includes EPT Main Event buy-in and extra cash for accommodation and travel.

The EPT London satellites can be found in the PokerStars lobby by clicking on ‘Events’ then ‘EPT’ click on register to play the satellite.

See the European Poker Tour event schedule below for all the EPT Season 8 venues and tournaments. Qualifiers are running exclusively on PokerStars where players can win their EPT prize package to any of the EPT Season 8 events.