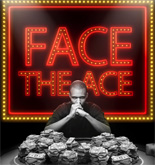 "Face The Ace" a new concept for a game show combined poker show will be heading to your TV with network airing date of the first episode scheduled for 1st August 2009 on NBC, the new poker TV series Face-The-Ace will be hosted by Steve Schirripa from the popular “The Sopranos” miniseries.

The new poker-theme game-show gives contestants the chance to play heads up against some of the world’s finest poker players.

Face the Ace poker game show will kick off with back to back episodes starting 9 p.m. ET. on the 1st of August with the remainder of seven episodes being televised on NBC every Saturday afternoon. Contestants will need to beat 3 pros on national TV to walk away with $1,000,000.

The game show will be comprised of many well known FullTilt Poker Pro with 41 World-Series-of-Poker bracelets plus 11 World Poker Tour titles and $100 million in tournament earnings the team will be known as the ACES and will consist of Howard Lederer, Patrik Antonius, Andy Bloch, Allen Cunningham, Chris Ferguson, Phil Gordon, Jennifer Harman, Phil Ivey, Gus Hansen, John Juanda, Erick Lindgren, Mike Matusow, Huck Seed, Erik Seidel and Gavin Smith with each pro being paid $10,000 to the charity they choose for each match they win. 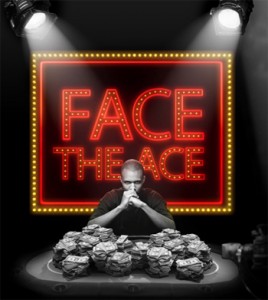 How NBC's Face The Ace works

Each poker player will get the chance to put their skills to the test against three professional poker players with a chance to take down a $1 million cash prize on national TV, the players for the event have already been chosen and have freerolled their way into the TV show by playing at FullTilt Poker's freerolls.

The first round starts off with a heads-up No-Limit Hold-em match worth $40,000, the contestant will begin by selecting a poker pro from behind smoked glass doors, should the contestant win the match up they have the option to up the ante by choosing to play another pro to play but this time for $200,000, should they succeed again they can play the third and final contest where they playoff against a third Poker Pro but this time for $1 million.

Players can walk away and take their prize money between rounds but should they lose they will leave the TV studio empty-handed.

The game show host Schirripa said about the poker show “This show gives contestants and incomparable opportunity to test their skills against some of the best poker players in the world. The same people they’ve read about or watched on TV are the ones they have to defeat for a chance at life changing money.”

Tournament director for the show is Poker After Dark's Ali Nejad with the hostess being Megan Abrigo Briefcase Model Number 6 on Deal or No Deal game show.