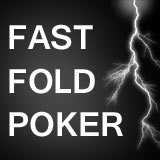 Fast Fold Poker games have become increasing popular with online poker players and there are many poker sites which offer the game as a regular feature on their poker software.

Fast fold poker has revolutionized the game of poker and provides more action than regular cash games and tournaments. Players get to play up to 400 poker hands within an hour and there is less time sitting around waiting for a playable hand.

Another great feature of these Fast Fold Poker games is that it is almost impossible for players to read your playing style as each new hand will be on a different table up against a pool of random players.

It also suits players of all poker playing styles with aggressive players able to steal pots but not knowing who they are up against and tight players waiting for the right opportunity to play their best hands.

The rules of fast fold poker are not much different from the regular NL Holdem tournaments or cash games, the main difference being that players can instantly fold as they are dealt their cards and the changing of tables for each new hand.

Online poker sites which offer the game on their software generally have their own name for the game, the first versions of the game were released on Full Tilt Poker as Rush Poker.

The software was patent pending and then when Black Friday hit Fulltiltpoker most poker sites released their versions of Fast Fold Poker. PokerStars bought out FullTilt and it's software and tried to patent the product and the patent was rejected by US patent office.

Click on the fast fold poker game links to find out more information or download the poker site software directly from the table above.

Try out the software for free on most of the poker sites before risking your bankroll on the real money poker games.

Games on offer normally included tournaments and cash games however some sites only offer the cash game option.

Some fast fold poker games can be played on tablets and mobile device so you can take your game with you and play anytime, anywhere.