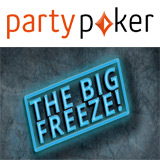 Freezeout Poker tournaments are now the standard format for most PartyPoker tourneys including events in the Powerfest Series.

After running a successful freezeout tournament campaign last month it seems that players prefer freezeouts without rebuys or re-entries.

The PartyPoker tournament structures have also been changed to the same format as what you'll experience when playing a live tournament at a World Poker Tour event.

Deep-stack NL Hold'em tourneys with antes from the start of the tournament which should encourage early action and shorten the overall tournament running time.

Party Poker have opted to change their tournament format and structure after feedback from their Pure Poker promotion which featured freezeout poker tournaments every Wednesday in March. If this is not your preferred tournament format don't be too dishearten as there are still a few tournaments running that will feature rebuys or re-entries.

PartyPoker have also chosen to change the tournament structures to the format that is used in the official World Poker Tour tournaments. You'll also be able to win a WPT Poker Passport to play any World Poker Tour Main Event by qualifying through satellite tournaments which start from just 1¢.

Players will now receive a healthy 30,000 chip stack when registering for a tournament, don't be fooled by the deep-stack format as the blind structures are designed to increase action. Blinds will start at 75/150 including a 25 ante which will encourage players be more active right at the start of the tournament.

You'll find the new changes applied to the regular tournaments on the PartyPoker schedule including the Powerfest Series Tournaments which launched earlier this year.

Register for these events Freezeout Poker tournaments in the Partypoker lobby.