The sad thing is that Full Tilt Poker were one of the very first to offer their players mobile poker apps for both Android and iPhone mobiles, it seems they have neglected to re-add the once popular mobile software which once included Full Tilt rush mobile.

One can only imagine they have plans to add their Full Tilt App to the Google play store and the Apple App store sometime in the future, but to date no information can be found about the apps on their website, they have simply disappeared.

PokerStars still offer their App for both Android and iOS devices, but personally I prefer the 888 Poker App along with the weekly promotions they offer.

Update March 2014: The Full Tilt Poker App seems to have been reopened after not being available for some time, the relaunched app is only the rush poker app, you can download it directly from your iOS or Android device from here: Download FullTilt Poker App

Full Tilt Poker made headlines with the launch of the FullTilt Poker App for mobile in October 2010 which included rush poker mobile, at first the software was only available to their black card members but they soon released it to all players.

While FullTilt Poker may have regained their number two spot in global rankings let’s see just how long they will last with PokerStars at the realm, what previously made Full Tilt great was that they were in direct competition with Pokerstars forcing both rooms to match and better each others promotions.

Now with Pokerstars owing both the number one and number two spots this rivalry has disappeared, one wonders just how long Full Tilt will retain the number two spot. Initially Full Tilt Poker had a mass of players playing when they reopened however these players are dwindling daily after realizing it’s no longer the old Full Tilt they were once used to.

We highly recommend the 888 Poker App as it is neat, easy to use and 888Poker simply offers unbeatable promotions to their players certainly something which PokerStars could not match.

888 Poker offer the best poker mobile app available for iPhone, Android and Tablets.
While not all countries are fully supported at this time have a look through the download links below to choose the right 888Poker App according to your requirements and region. 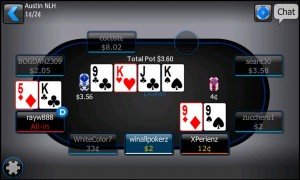 Note: The 888Poker app requires players to sign up for a new player account prior to starting the download, but it's pretty decent so take a few seconds to create an account and you will be pleasantly surprised as depending on the country you sign up from you may get a free bonus depending on the current offers at the time.

Once you have completed the registration a download link appears along with instructions on how to install the 888Poker .apk or .ipa to your mobile phone or tablet.

The 888Poker App is currently not available to Spain or Italy where licensing presents an issue, we have contacted them regarding this and should it become available we will update this post.

Bwin is another pretty good choice but they have issues currently with the Apple App Store in that at one time the Bwin Poker App was available and it no longer is, it was probably removed by Apple but Bwin still offer their Bwin Poker Android App.

PokerStars do have an app they have launched but it keeps disappearing from the app store for some reason, read more about downloading the PokerStars App here.

Partypoker have been really late in entering the mobile poker app market but they have probably been too busy merging with BWin. On the other hand Bwin Poker already offers a mobile app so they will probably launch a similar app for Party Poker based on the Bwin Poker app.

We have recently added a Mobile section check out the latest news about Mobile poker apps, any news about the Full Tilt Poker app will be added if they choose to release it ever again.

We also added a summarized review page for the Best Poker Apps in 2014.

One Response to Full Tilt Poker App for iPhone and Android?