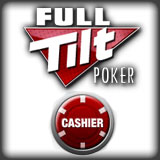 In this opinion article we suggest that you Cashout your Full Tilt Poker Bankroll and don't continue playing on the new site. Why you ask? When Full Tilt Poker re-opens on 6th November it may appear to be the same poker site with the latest technology and best online poker bonuses and promotions.

This will not be the case, when FullTilt returns it will be under the ownership of PokerStars.

We can however thank PokerStars for saving FullTilt and refunding a large percentage of players from around the World.

When Full Tilt Poker re-opens players will have the option to cashout their bankrolls which have been locked up for more than a year and a half or continue playing on the newly owned poker site.

PokerStars claim that the new site will be run independently as two separate companies with different promotions and bonuses for players. While the promotions may differ PokerStars policies will still apply including the way players clear their deposit bonuses.

Although I don't agree with the way the old Full Tilt Poker managed it's finances, FullTilt was the fastest growing online poker site which became the second largest online poker site in just under 7 years of opening it's doors in 2004.

The rivalry between Full Tilt Poker and PokerStars kept both sites on their toes, trying to outdo the competition. Full Tilt Poker were the first to offer a bigger sign-up bonus up to $600. PokerStars offered a 100% up to $50 bonus until they updated their bonus mid 2009.

Full Tilt Poker bonuses were fairly easy to clear with less points required to actually double your deposited amount, PokerStars bonuses have always been almost impossible to complete the entire bonus, due to higher point requirements.

The demise of Full Tilt Poker could partly be blamed on their obsession to keep up with PokerStars. FullTilt continued to accept deposits from US players even when deposits failed, so players were receiving bankrolls without being charged. This was mostly to prevent losing US players to their competition.

Full Tilt Poker also put more time and money into developing their software adding revolutionary features to keep ahead of their competition. Full Tilt Poker Rush Poker was released early 2010 and was the first Fast Fold Poker game, only now in 2012 have other poker sites started adding the new popular poker game to their software.

One has to wander if the main reason behind PokerStars purchasing Full Tilt Poker was to get hold of the competitions software and implement the same ideas and features on PokerStars. I can assure you that PokerStars never spent millions to purchase FullTilt with the intention to build a better reputation in the poker community by repaying FullTilt Poker players. It was purely a business decision to eradicate competition and have the monopoly.

This October, after acquiring FullTilt Poker assets, PokerStars have announced the upcoming release of the new poker client PokerStars 7. Keep in mind that this is the first major update PokerStars have had in more than 10 years, it includes a completely new lobby design which looks very similar the Full Tilt Poker software.

The new FullTilt Poker will not acquire special licenses to operate in specific countries, that is a sure sign that the company doesn't plan to grow or expand the poker site to it's full potential. You can be guaranteed that whenever a new poker license becomes available in a new country PokerStars will be one of the first poker sites to secure their license.

My personal opinion is that PokerStars bought Full Tilt Poker out of fear, fear that some new owner would step in and resurrect the site putting the pressure and competition back on. PokerStars have more than 50% of all online poker traffic playing on the site and are now an unstoppable force in the poker industry.

What are your plans for the 6th November - Cashout or Continue Playing? - Download Full Tilt Poker

The opinions expressed in this article are those of the author, and they do not reflect in any way the website to which he is affiliated.