FullTilt Poker have introduced Matrix tournaments which are multi-table Sit and Go tourneys, those who enjoy multi-tabling will love the concept. Basically with one buy-in you get seated at four tables simultaneously. Buy in's for the new format range from the lowest buy in's right up to $2100+$90 tournaments, both six and nine seater events Fulltilt Poker Matrix tournaments are held.

Get a 100% matched bonus up to $600 when using WAP as your FullTilt Poker bonus code.

So the new FullTilt Poker Matrix concept goes along the following lines, you buy into a matrix event (Matrix Tournaments display a small M in the tournament lobby at Full Tilt Poker). Four will tables pop up and at each table you will face the same opponents, these players then continue to play until a winner is determined for each Sit and Go similar to if you had multi-tabled four individual sit-n-go's, every table will have its usual prize pool with the exception of a carried over amount that is held in the Matrix Pool, the Matrix pool is then paid out once all play is completed on all four tables to the top three players that earned the highest Matrix score for the tournament. 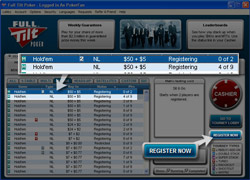 FullTilt Poker Matrix points are earned at a rate of 2 Matrix points for each knockout made plus 1 point for each player that you finish higher than and an additional 2 point bonus for a first place finish in any of the four tables played.

Player’s points for individual tables will be listed by each Matrix match under 'SCORE BY MATCH' in Fulltilt's Tournament Lobby with the total points for the entire tournament listed under 'MATRIX SCORE'. 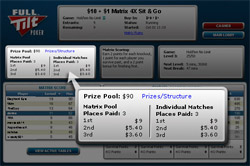 The idea is proving popular so far and could perhaps encourage more players to become accustomed to multi-tabling or the fad could just fade out, let's see.