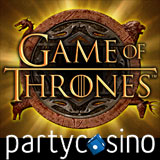 The Game of Thrones Slot themed on the popular award-winning TV series is now available at Party Casino, fans of the TV show will be impressed by the jackpot slot game.

Featuring music from the theme song and action scenes, graphic artwork and characters from the series, including the houses of Stark, Lannister and Targaryen.

Party Casino will match your first deposit amount with a welcome bonus up to a maximum of £/€/$100 when using the latest PartyCasino bonus code when signing up.

The slot game features all the action and drama of the Emmy award-winning TV series, Game of Thrones, and promises to not disappoint fans with the online slot inspired from the TV show.

The slot has also received awards for the best slot game of 2015 with epic battle scenes, dragons and riveting music from the series will keep fans on the edge of their seats while they stand a chance to win the huge progressive jackpots.

Below is a video preview of the ARC double slot machine version of the game released by developers Aristocrat gaming.

Aristocrat gaming are the developers of the Double Arc styled Vegas slot machines, other titles of TV series slots they have developed include: the Big Bang Theory slot machine, Sons of Anarchy slot machine and The Walking Dead slot machine.