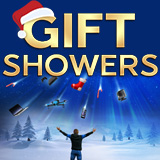 The Gift Showers 2016 promotion returns to 888poker and will run until Christmas day offering over $800K in cash and prizes during the promo dates.

Players can win cash and a selection of electronic prizes such as iPhone 7s, GoPro Hero 5 cameras, PlayStation 4s and other items from the 888poker store.

Don't miss out on this awesome promo where you can win free prizes during the upcoming holiday season. Players can get tournament tickets to the daily and weekly tournaments by completing daily missions, by playing the daily star spin game or by making a deposit.

Make a deposit and enter the 888poker promo code on the deposit screen to get five tournament tickets to the daily Lucky Star tournaments. Depositing players will also be eligible for up to two free spins on the daily star spin wheel where they can win additional tickets for all the tournaments and more.

Players that have made a deposit at 888poker and have been active by playing poker for real money within the prior three months of the promotion.

Complete any of the daily missions to get a tournament ticket to the Lucky Star tournament, maximum of three tickets per day.

All players that have made their first deposit at 888poker will be eligible for up to two free daily spins on the Star Spin Wheel game. All new non-depositing players will get one free spin after signing up.

The 2nd daily spin will be available to depositing players on the mobile version of the 888 poker software. Prizes are issued to players within 72 hours of spinning the wheel.