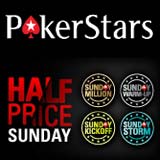 PokerStars Major Sunday Tournaments will have their buy-ins reduced by 50% but will still have the same guaranteed prize pools. Players can buy-in for half price to several Sunday PokerStars tournaments on the 17 June 2012.

PokerStars host some of the largest guaranteed poker tournaments, here's your chance to play for millions with 50% off the regular buy-in. Play the Pokerstars Sunday Million, Sunday Warm-Up or the Sunday Storm, satellite tournaments are also available.

Register for these Pokerstars tourneys in the lobby from the ‘Tourney’ & ‘Special’ tabs. Satellite tournaments for these events can also be located on each tournament registration page.

The Pokerstars MicroMillions II tournament series returns on 12 -21 July 2012, micro stakes poker players can buy-in from $0.11 up to $22 for a series of guaranteed poker tournaments. Buy-in directly on the day or start playing for your seat in the daily satellite tournaments to win your seat for a fraction of the price.

The Pokerstars Mobile App is now available for Android, iPhone and iPad, play the mobile version of Pokerstars on your mobile device. Games include: Ring Games, Tournaments, SNG as well as the popular Pokerstars Zoom Poker.