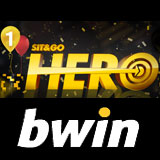 There are several promotions running in celebration of the one year anniversary including a 100% deposit bonus up to $100.

In celebration of the first anniversary of the Hero Poker SNG format, bwin are offering their players some very special promotions during the month of April.

HERO Sit & Go tournaments are a unique four player format which includes a bounty prize on a random player. The prize pool is randomly generated as the players are seated at the table. Win up to 10,000 times your buy-in amount within minutes.

Get a 100% match of your deposited amount up to a maximum of $100 this April on Bwin poker.

To claim the bonus players are required to use the bwin bonus code HEROBDAY on the deposit screen when making a deposit.

The bonus is limited to be claim once per player during the promotional dates, player must complete the wagering requirements within 14 days of issue.

To clear the bonus players must earn eight points for every $1 of the bonus which is released in five parts of the deposited amount.

Play any five Hero tournaments of the same buy-in amount and get your tournament tickets for that buy-in for free.

Players can claim up to 8 free tickets per day at each buy-in level. The 5for1 promotion runs from 1-17 April, 2017 on Bwin poker.

As part of the celebrations all players can login to bwin poker daily and earn just one point to claim their hero click card.

There will be a special surprise promotion running over the weekend of 14-16 April, don't miss out on your chance to win some fantastic prizes.