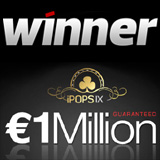 The iPOPS IX Series is back with a million in guaranteed prize pools spread across the thirty scheduled events in the online poker tournament series.

The iPoker Online Poker Series starts from 19th October and runs until 8th November with buy-ins starting from as low as €1 up to high stakes.

Start qualifying now through the daily satellite tournaments to get your entry to the events for much less than the direct buy-in amount.

Get a massive 250% first deposit bonus up to €1,500 when signing up to WinnerPoker, one of the most poker sites on the iPoker Network.

The iPOPS IX Series features two different stakes levels start with a micro-stakes series followed by a mid to high stakes poker tournaments. The series format is suitable for players of any bankroll size with it's diverse range of buy-ins and qualifying satellite tournaments starting from €0.20.

Play for your share of the total combined prize pools that add up to over a million Euros guaranteed on the iPOPS IX tournament schedule.

Get the biggest bonus from WinnerPoker on the iPoker Network, deposit and claim your 250% bonus up to €1,500.

The iPOPS IX mini kicks off from the 19th October and feature two daily events with buy-ins starting from €1, enter the Mini Main Event for only €20 and play for your share of the €50,000 guaranteed prize pool.

The iPOPS IX High starts from the 1st October and feature two daily events with buy-ins starting from €20, enter the iPOPS IX Main Event for only €100 and play for your share of the €250,000 guaranteed prize pool.