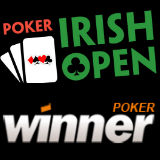 The Irish Open Poker 2015 is scheduled to take place at the Doubletree Hilton Hotel, Dublin between 3-6 April and guarantees a €1,5 million prize pool.

The event is the most prestigious and longest running live poker tournaments in Europe.

WinnerPoker are running satellites tournaments where players can win a prize package to the Irish Open Poker 2015.

There are a total of five packages to be won through the super satellites running every Sunday and Monday until March 2015. Also taking place on the Sundays is the all-new Winner Poker Sunday Line-up where there is €200K in guaranteed prize pools.

Win a €4,500 prize package for the Irish Open Poker 2015 on WinnerPoker, there are weekly satellite tournaments offering five packages to this prestigious event every Sunday.

The tournament attracts thousands of players from around the World as it is centrally located in Europe making it accessible to players from this region.

The Irish Open Poker 2015 prize package includes: buy-in, accommodation, travel and spending and is valued at a total of €4,500.

Accommodation at Doubletree Hilton Hotel, Dublin and only available for one person however guests can be checked in at an extra €10 for each night.

There are two weekly super satellites running which both offer guaranteed Irish Open Poker 2015 prize packages see the details below for more information.

Players can qualify for the weekly super satellite by playing the daily qualifiers which start from as little as €1.

Register for the satellites and qualifying tournaments in the WinnerPoker lobby by clicking on the Irish Open tab.