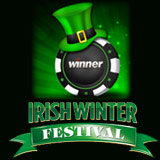 The Irish Winter Festival 2013 is scheduled to take place in Dublin at the Burlington Hotel between 25-28 October.

The Irish poker fest runs all weekend and will attract many European poker players as the event is centrally located.

Win your seat by playing the Irish Winter Festival 2013 satellites on WinnerPoker, prize packages include tournament buy-in, accommodation and travel.

Qualify for the Irish Winter Festival 2013, one of the biggest annual poker events in Dublin. Win a 2013 IWF prize package in the satellite tournaments which start with buy-ins as low as €0.30.

The satellite tournaments can be found in the WinnerPoker lobby by clicking on the Land Based tab. Players can also win their seats to these events by playing the qualifying satellites which start from only €0.30.

The Caribbean Poker Tour 2013 satellites are also running until 20th October 2013. Players can win prize packages to play both locations on the 2013 CPT - Punta Cana and St. Maarten.

Winners will get the Ultimate Caribbean Poker Experience package which includes everything you need: travel, accommodation, tournament buy-in and much more.

Qualifying tournaments are available for €1 buy-in, qualify for your seat to poker paradise. The WPT Caribbean will also be part of the CPT St. Maarten, so players can take part and win a prestigious World Poker Tour title.