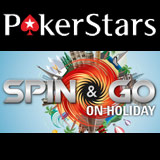 PokerStars are giving new players three free Spin and Go tickets just for signing up, no deposit required. You can play for various prizes including: Spin & Go Holiday tickets or even a holiday package.

The luxury holiday packages are paid out as a Flight Center travel voucher so you can book the holiday and destination of your choice.

Jackpot SNG Poker Games have become extremely popular for SNG grinders, with variations of the game available on most major poker networks.

Win a holiday package of your choice in the PokerStars Spin n Go Holiday Edition promotion which runs for a limited-time.

PokerStars are giving three free tournament tickets to all new players that signup during the promotional dates which run until 9th October, 2016.

With the free edition of the PokerStars Spin n Go on Holiday players can immediately play their three Spin N Go tournaments after signing up. Register for a game and you'll be playing for a random prize which will be announced before the tournament begins. See the table of prizes below and the odds of winning each prize:

Player can also pay the buy-in version of the PokerStars Spin n Go Holiday Edition tournament for only $0.50 per game. You have greater odds of winning that holiday package when playing for real money.

Holiday packages are paid out as Flight Center travel vouchers in $5,000 and $500 amounts, PokerStars has a support team to help winners organize their dream holiday. Winners will receive an e-voucher code within 72 hours which can be used to book their holiday from Flight Center.

The package is flexible and allows winners to add more funds to their package if the holiday exceeds the value of the prize.