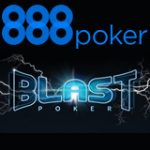 With the release of the new popular poker format, Jackpot SNG Strategy is needed to win at these Sit n Go tournaments.

While this strategy will apply to most of the variations of Jackpot SNG tournaments we are specifically focusing on 888 Blast Poker.

There is currently 888Poker Blast Poker promotion running where you can win tournament tickets and much more.

If you have not yet played 888 Poker Blast Poker Jackpot Sit & Go yet, you are missing out on one of the most exciting new poker formats.

The multiplier is also a huge factor in your Jackpot SNG Strategy as it determines how many positions will be paid in the tournament. 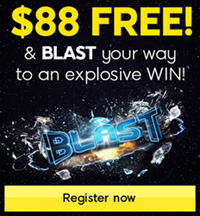 The multiplier is based on the buy-in amount of the tournament, the payout structure and prize pool distribution is the same for all buy-in amounts: 10c, $1, $5 & $30.

Once you know what the tournament multiplier is you'll need to adjust your game play accordingly.

For instance the common two times multiplier games payout first place double the buy-in amount. This gives players a 25% chance of doubling the money they invested in the tournament. The biggest tip for the 2x multiplier games is to be aggressive, you won't get that first place prize playing passively.

Your jackpot SNG strategy should change when playing a 5x multiplier as the prize pool distribution changes. Instead of 25% chance of cashing you now have a 50% chance of getting paid. Also note that the countdown timer is extended by one minute.

My advice is to play more passively in these games especially at lower stake levels. Other players at the table seem to an continue with an aggressive playing style, expect a few all-ins on the first few hands.
It is not really necessary to call these all-ins when the blinds are still so low unless you have a really strong pocket pair.

Most times you can sit back and watch the all-in action and one or more players will be eliminated before the fourth hand. This leaves you in the payout position with at least 1.5 times your buy-in returned. Your only goal then is to aggressively take down the big stacked player you up against with the remaining time left on the countdown timer.

These games are less common and you'll either be very lucky to hit these multipliers or have played a couple thousand tournaments before you do.

It's important once again to note the change in the prize pool distribution in these games. You have a 75% chance of cashing as three out of the four players will get paid. Your main goal is to not be eliminated first.

You can hold back on the aggression for the first minute or two as the countdown timer is extended by a few more minutes. Once a player is eliminated you can continue to play with your regular SNG tournament strategy apply more aggression in the right places.

Consider yourself extremely lucky to be seated at one of these games as the odds of it happening are very rare. All players dealt into these jackpot SNG poker tournaments get at least 10% of the total prize pool.

Play like you normally would in any SNG poker888 tournament taking into account that there are less players than a regular 6 or 10 handed SNG tournament.