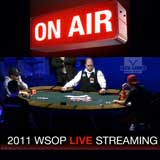 PokerStars Pro Jason Mercier wins a WSOP Bracelet in Event #35 Pot-Limit Omaha (Six Handed) $5,000 buy-in event. Runner up was Hans Winzeler who put up a tough fight playing Heads-up against Mercier. This is the 2nd WSOP bracelet for Jason Mercier who won an Omaha Event in 2009.

Watch the WSOP Live Stream with the live streaming of the final tables of each event.

With two WSOP Bracelets to his name both for Omaha events, Jason Mercier is becoming an Omaha Champion. His total cashes in WSOP events are now up to $1,5 million, the USA Team PokerStars Pro conquered a field of 507 players to win gold in 2011 WSOP Event #35.

There are still more than 30 events left in the series including the Main Event, which draws the biggest crowd of poker players to the RIO Casino in Las Vegas every year. Despite the negative influence that Black Friday had on Online Poker, attendance has not been affected at this year's World Series of Poker.

Although some Full Tilt Poker pros have been seen not wearing their FullTiltPoker.net branded patches most probably because of how long USA Poker players payment delays have taken. While Jason Mercier proudly brings home another bracelet for PokerStars. ElkY wins his first WSOP Bracelet another great victory for Team Pokerstars while others like Phil Hellmuth misses 2nd attempt at winning a WSOP bracelet finishing in second place twice in this year's events.

Watch the 2011 WSOP live stream on WSOP.com get all the updates, results and chip counts of all the WSOP events. Fans can also tweet their support messages live on the site as the action unfolds. Community cards are show on the live stream so fans can see watch their favorite poker pros in action.

The video streams fairly smoothly and is presented by Jack Link's Beef Jerky and powered by Veetle. 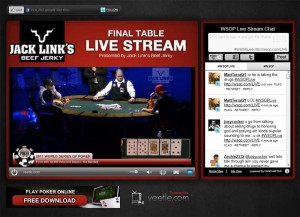