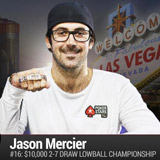 Jason Mercier WSOP 2016 wins 4th Bracelet and title of his career and doesn't plan on stopping till he win at least three WSOP bracelets at the 2016 World Series of Poker.

Mercier won the $10,000 2-7 Draw Lowball Championship event earning $273,335 and claims he got more than the first place prize from a bracelet earning side-bet he had with friends.

His goal is to win a side-bet that he has with Vanessa Selbst in which he is required to earn three WSOP bracelets in 2016 to score a massive payout. Having bagged his first bracelet fairly early into the series he is determined to take-down two more events to win the prop-bet.

There is still some time left to qualify for the 2016 World Series of Poker Main Event prize packages online at 888poker with qualifiers running daily.

Jason Mercier wins 4th WSOP bracelet at 2016 World Series of Poker in the $10,000 2-7 Draw Lowball Championship which is event 16 in the series of sixty-nine bracelet events.

If he can keep on that hot streak he has a chance to win a massive 3-bracelet-winning prop-bet that he has with PokerStars Team mate Vanessa Selbst.

Mercier played his way through a playing field of 100 players and reached the final table which included some tough competition: David Grey, Stephen Chidwick, Mike Watson and Alex Luneau.

He took to Twitter after his win saying One down ... 2 to go!! showing his determination to complete the prop-bet or at least make Vanessa Selbst sweat abit.

If he is expecting a miracle at the prestigious live poker tournament series, it has already happened when The Professor & Jesus Returned to the 2016 WSOP.