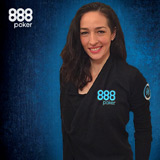 Kara Scott has just been announced as the latest 888 Poker Ambassador to the team, Kara formerly Team PartyPoker is no stranger to the poker industry.

She has been actively promoting poker for more than a decade as a poker player, TV presenter and journalist. Kara Scott has presented and commentated on several poker TV shows including: Poker Night Live, High Stakes Poker and World Series of Poker.

Her achievements as a poker player include: top 100 on the Canadian All-Time Money List and a total live career earnings of $643,880.

The former Team PartyPoker pro has migrated to 888 Poker as the new face and representative of the 2nd largest poker brand in the World.

Kara Scott started her poker career in the industry as a TV presenter for Poker Night Live in 2005 where she fell in love with the game. She also wrote many articles as columnist for one of the biggest poker media company at the time.

Scott's knowledge of the game and personality land her the job as a co-host to Gabe Kaplan on the legendary High Stakes Poker TV show (season six) in 2010.

The following year she became part of the WSOP team as a commentator for the 2011 World Series of Poker Main Event with Lon McEachern & Norman Chad.

Kara Scott is a self-proclaimed poker enthusiast and doesn't claim to be a poker pro although throughout her poker career she has achieved some impressive results.

"I know a lot of people don't think I can play and there are always going to be people who say I can't. But I have made the final of a female championship, I won a Sports Star Challenge, I went deep in the World Series of Poker Main Event and now I've come second in the Irish Open."

The transition from PartyPoker to 88poker was a great decision on her behalf as the former number one online poker site PartyPoker has lost momentum in the industry.

“I’ve long been impressed with 888poker’s focus on providing great player experiences. I’m a big believer in just how much FUN poker can be and adore being involved with the recreational side of the game, as well as the more serious side. Joining the 888poker team is a fantastic milestone for my career and I feel honoured to be representing such a key player in the poker industry. I’m also really excited to be a part of their impressive team of ambassadors! I am looking forward to a bright and successful future with 888poker.”