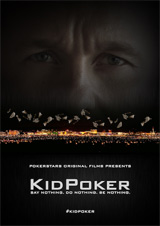 Watch the Kid Poker documentary stream on Netflix, the hour and a half documentary features the life of PokerStars poker pro Daniel Negreanu.

The full story on the best tournament poker player in the World who is still currently first on the all time money poker list and how he got there.

All the footage from the major tournaments which have earned the respect on the live poker tournament circuit where has earned over $32 million.

Not only is he the face of PokerStars the biggest online poker site, he is also a great ambassador for the game of poker and is very outspoken representing the poker community when needed.

The Kid Poker documentary is available on Netflix in the UK, Ireland, USA, Canada, Australia, and New Zealand.

The first 20 minutes of the kidpoker movie focuses on his family and childhood where he was introduced to pool halls and eventually finding poker at a very young age.

He was pretty good at most things he set his mind to and started making money playing poker at home games in his hometown.

Being young naive and cocky new kid on the block to the poker scene he tried his luck at becoming a pro and going to Las Vegas to try and play the best.

Having gone broke 5-6 times in Vegas losing about $3000 on every visit he then realized that all the players at the table were only there to take his money. He was the aggressive fish on the table and needed to change his strategy.

His first break came after beating poker pro Todd Brunson in a WSOP satellite tournament, Brunson then offer to stake him in a WSOP event.

The 1998 WSOP pot limit holdem tournament had a tough field of poker legends including Eric Siedel, Johhny Chan and Dan Harrington. Negreanu won the event and was the youngest player at the time to have won a WSOP bracelet and $169,460 at the age of 21 years old.