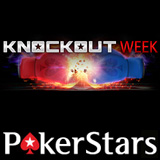 Knockout Week Tournaments are coming to PokerStars for one week only between 12-18 October with over $5 million in cash to be won.

There are thirty five schedule PokerStars knockout tournaments including the $500K Main Event.

Get bounty prizes for eliminating your opponents in this exciting poker tournament format. Make a deposit during PokerStars Knockout Week and get your entry to the Main Event satellite tournament for FREE!

Play for your share of $5 million in prize pools during PokerStars Knockout Week running between 12-18 October and get bounty prizes, freeroll entries and much more.

Crush your opponents and score bounty prizes with every elimination in the Knockout Week tournaments, knockout more than two players and you can win a random cash prize ranging from $1 up to $5,000.

Download PokerStars - get up to $600 bonus on your first deposit.

Get your tournament ticket to the $500K Knockout Week Main Event satellite tournament for free by making a deposit of at least $10 during the promotional dates.

Use the PokerStars bonus code KOWEEK on the deposit screen to claim your free satellite tournament ticket worth $1, only one ticket per player can be claimed.

Complete the PokerStars Knockout Week Challenges and win up to $5,000 in cash, eliminate at least two players to get your random cash prize instantly. Players are guaranteed a cash prize for completing each challenge.

The top 1,000 players in the leaderboard will win extra cash prizes and a freeroll entry based on the position in the PokerStars Knockout Week Leaderboard.

Leaderboard points are awarded for each player that you eliminate in the knockout tournaments, knockout at least two players to start ranking.

Players get a cash prizes and a bigger starting stack for the $10,000 Knockout Week freeroll tournament based on their leaderboard ranking. The freeroll is also in the knockout tournament format with $5,000 in cash for the prize pool and an additional $5,000 in cash for bounty prizes, the freeeroll is scheduled to take place on Sunday, 25 October at 14:00 ET.