Only one week after a historic US election which resulted in Obama's win and the recent WSOP 2008 winner celebrations the current Bush Administration is rushing to finalize several last minute “midnight rules” before they depart the oval office. The old Bush administration has once again targeted the UIGEA (Unlawful Internet Gambling Enforcement Act), using the same old sneak tactics similar to the original UIGEA legislation drafted in 2006, once again the reckless rule making is in effect as the ousted party are planning a last minute effort to make poker illegal in the USA by declaring online poker illegal by preventing US banks from processing any transactions from any online poker sites. If you are a US citizen, this is your chance to protect your freedom of choice and rights before this law is passed into effect forever leaving the new Obama administration no access to change the law.

Join the Poker Players Alliance, a group dedicated to Poker's survival in the US. 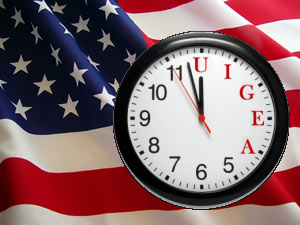 The Bush Administration is currently finalizing regulation that will enforce a ban on Internet gambling in the USA, despite concerns raised by leading financial service companies that the regulations are ambiguous, burdensome which will not stop millions of Americans from gambling online. The regulations are set to be finalized at the last minute before they can be stopped by the new Obama Administration.

USA Citizens concerned with this legislation being passes can call the U.S. Federal Reserve and tell them not to approve the UIGEA regulations — Board of Governors on 202-974-7008 or Public Affairs at 202-452-2955.

Your call will make a huge difference and will add the public’s voice to these last minute policy decisions our government is poised to make. Why stand idly by while they make decisions that will impact your right to play Poker America’s card game. PLEASE CALL TODAY!

The federal agencies responsible for our nation’s economy should not be focused on Internet-poker regulation.

Finalization of the UIGEA rules will add additional burdens to our already struggling financial systems.

Internet poker is a game of skill and a form of recreation for millions of Americans; it should be exempted from the UIGEA.

Please do not finalize the UIGEA regulations until their impact on our banking systems and average Americans has been fully studied.

See more information and the latest news to join the fight in preventing this legislation from passing visit the Poker Players Alliance, ACT NOW BEFORE IT'S TOO LATE!!!!