One of the most popular variations of poker is Texas Hold'em and a great game to learn which is currently in full bloom due to all the television exposure received by No-Limit Tournaments like the WSOP, luckily it is rather the easy to learn the basics yet difficult to truly master the finer intricacies of the game.

The basics of Texas Hold'em are as follows, a minimum of 2 up to a maximum of 10 players can play on one table at a time in Texas Hold'em Poker, each player seated at the table is dealt two cards face down, these two cards are what is known as the players 'hole cards' and only the player can see and use these cards throughout the entirety of the poker hand.

Next, a further five cards are dealt face up in the middle of the table in plain sight of everyone these cards are what are known as 'community cards' which all players now use to compile their poker hand with.

Players need to make the highest / best possible five card hand combination from all seven total cards they now have in play, using their two 'hole cards' plus the 5 down cards in any combination either using none, both or one of the hole cards with the community cards.

The game is split into four betting rounds which move in a clockwise order around the table with betting starting from the player who is positioned next to the dealer button. The dealer button itself moves one place to the left after the completion of each poker hand. In online poker games and card rooms, the dealer button actually replaces the real dealer found in home games, in which the duty is split as each player has their turn to deal the game.

Side notes: Whenever a new game commences the dealer is usually decided by the highest card dealt to all players at the table by simply dealing one card to each player seated when starting a new game of Texas Hold'em poker.

In determining a winner for each hand, the highest possible hand always wins however if two or more players hold the same strength hand the hand will be tied and the pot is split between the players remaining in the pot with the winning hands, should an odd chip be left in the pool which cannot be divided equally the player seated nearest to the left of the dealer button receive the difference. The highest possible value of these chips would be equal to the lowest value your lowest denomination chip is in play at any stage on the table.

Blinds are introduced prior to commencing any hand with the two players seated closest to the left of the dealer button being required to put chips up prior to anyone receiving their hole cards, they are called blinds exactly for the very same reason that they are placed prior to players having seen their cards. The purpose of having blinds in poker is rather simple, in poker blinds ensure that some money is always in the pot and gives other players a reason to play the hand as something can be won. The player who is to the extreme left of the dealer or dealer button must post what is known as the 'small blind' with the player who positioned to his left being required to post the what is known as the 'big blind'.

Side notes: To Post in poker means to place or to bet it is common to refer to posting blinds which basically means placing the blind bets. Blinds can vary in size and often vary according to action being received by the group of players, blinds are pre-determined. In tournaments blinds increase at different levels to help the game progress to eventually determine a winner, blinds can be incremented after x hands or according to time. Small blinds are usually half the size of big blinds but that can vary on occasion according to limits like a 3 unit small blind and 5 unit big blind is common. 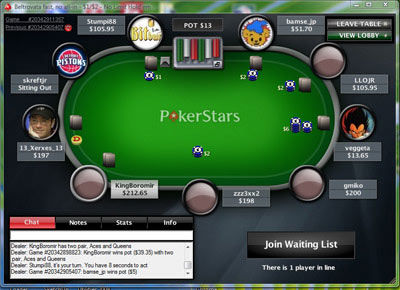 After each player has received their hole cards which can also be referred to as pocket cards or down cards. The betting action begins with the player to the left of the big blind; the player may choose one of three different options to either call the bet made by the big blind, raise the bet, or to fold their cards with no further chance of winning the pot.

To Call is an option that allows a player to match the amount bet previously in the current scenario calling would mean matching the big blind's previous bet.

To Raise would be to increase the amount previously bet within the table limits.

To Fold gives the player the option to quit the hand by surrendering their cards and no longer standing a chance to win the hand also forfeiting any previously bet chips in the pot.

Betting continues clockwise around the table giving each player a chance to act on their hand by using the options listed above. If any play happens to raise the pot, then all remaining players need to match the raised amount in order to remain in the game for a chance to win the hand/pot, they would also be presented with the option to re-raise the pot or to fold their hand without having to invest any further chips into the round. The player who made the big blind bet has an option to 'check' or 'raise', checking allows him to stay in the game without adding further funds to the pot if no opponents had previously raised the pot, or he may re-raise which would be the same as the previously mentioned raise option.

Once all players have made their choices in regard to their hand to fold, check or match the bets made by their opponents, the next set of cards is dealt which is known as the 'flop'. 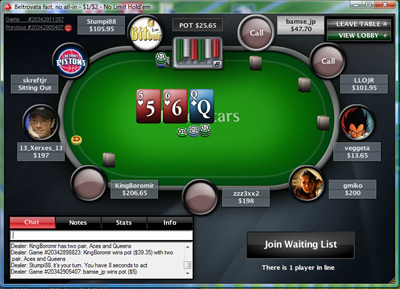 'The Flop' in Texas Hold'em poker

The flop in poker games refers to the first of three 'community cards' that are dealt face up on the table. Players then use these cards dealt in order to begin to make their final five card poker hand, after the flop is dealt a second round of betting ensues, similar to the round before, starting with the player to the left of the big blind betting continues in a clockwise motion around the table giving each opponent a chance to play their hand by using the their options to Fold, Check, Bet or Raise all players who wish to partake in the pot need to match any players bets in order to remain in the hand or game and to progress to 'the turn'. 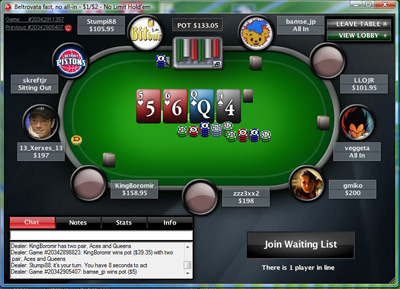 After the completion of betting made during the flop a further card is dealt face up which adds as a fourth community card, the game once again gives all players the chance to decide their fates and that of their opponents by using the newest card dealt to further complete making their final five card hand, after the turn is dealt a third betting round continues, identical to the prior round, it once again begins from the player seated to the left of the big blind, with betting options presented in a clockwise motion around the table, with each player getting a chance to play their poker hand by using the options to either Check, Fold, Bet or Raise. Once again all players wanting to remain in the pot to contest the outcome of the hand must match any bets made in order to remain in the hand or game and to progress to 'the river'. 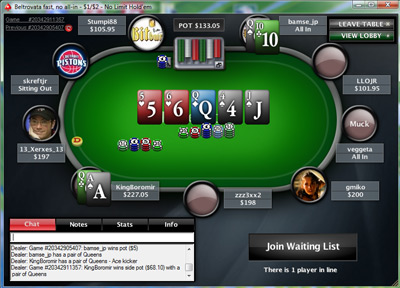 The River brings up the fifth and final community card which is also dealt face-up in the centre of the table, which starts the final round of betting, once again all players are given the option to play their hands using the newest card dealt to complete their final five card hand, the betting rounds starts from the player seated to the left of the big blind, with betting options presented in a clockwise motion around the table, with each player getting an option to play their poker hand by either Checking, Folding, Betting or Raising the pot. Any players wish to remain in the pot to contest the outcome of the hand must match any bets made in order to remain in the hand or game and to progress to 'the showdown'.

The showdown is reached in poker when more than one player is still remaining in the game, a showdown is when player finally reveal their cards and the winner is determined by the player whom has the highest ranked cards (Rank of Poker Hands). As previously mentioned if two or more players have identical ranked hands, the pot would be split amongst those with the highest hands.

Learning to play Texas Hold'em has become easier with many online sites now offering excellent tutorials of how to play poker with detailed lessons, information and advice from pros as well as from experts of poker. Take advantage of our poker bonus codes which give you an edge by adding bonus money to your bankroll (player account) when signing up and depositing funds online at any of our recommended top poker sites.

Continue Learning more about how to play poker with our lessons.