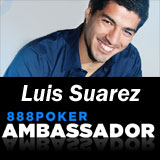 Luis Suarez Removed From 888 Poker - Following the recent biting incident in Uruguay vs Italy match, the football star has since been removed from the list of 888 Poker Ambassadors.

It appears as if the partnership between Luis Suarez and 888 poker has been terminated as there is no trace of Suarez on the 888poker website, every single image has since been removed.

888 Poker released a short and brief statement which states they are currently reviewing the partnership, and feel that his behavior was unsportsmanlike for an ambassador of their brands.

The 888 Poker Football Carnival promotion will be unaffected by the recent events, players can still participate it the daily $10,000 freerolls and get free tournament tickets when signing up.

The football legend Luis Suarez is currently facing disciplinary action from FIFA for biting Giorgio Chiellini during the 2014 World Cup in the Uruguay vs Italy match on 24th June.

Suarez joined 888poker just before the World Cup began and was representing 888poker as a global ambassador for the brand.

The day after the biting incident 888poker started removing all traces of Luis Suarez from their promotions, articles and images. It looks as though the sponsorship deal between Suarez and 888poker has ended.

Yesterday the online poker site released a rather brief statement via Twitter which confirms that the football star partnership is under review and could well be dropped for his cannibalistic behavior.

Following recent allegations made against Luis Suárez, we are reviewing our relationship with him. We will not tolerate unsporting behavior.

What was Suarez thinking? surely he knows that with technology and the amount of people filming the match there was no way he could get away with committing any offenses in such a high profile international football event.

This is not the first time Suarez has bitten other players during a match, there are at least two other cases of biting from Suarez the Cannibal.

A statement from Suarez's lawyer claims that the indecent was casual play and that Suarez suffered a worse injury that his opponent. Then also claims that the English, Italians and Brazilians are conspiring against him to get him expelled from the 2014 World Cup as he is a threat to the other teams of which he is responsible for two of those countries being eliminated. 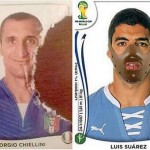 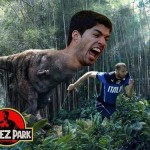 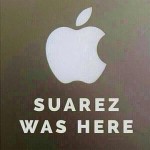