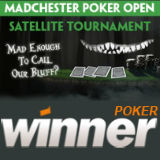 Qualify for the MADchester Poker Open 2014, a live poker tournament hosted by iPoker at the Manchester 235 Casino.

WinnerPoker are running satellite tournaments where players can qualify for their entry into the £100,000 guaranteed poker tournament on 21-23 November, 2014.

Participation is open to players Worldwide but does not include travel or accommodation in the UK, the promotion is best suited for players from England or surrounding European countries.

There are 10 seats guaranteed every Sunday with a total of 30 seat to be won over the promotional dates on iPoker Network sites which include: WinnerPoker and Titanpoker.

Over the next three weeks players can win their seat in the daily satellite tournaments or final satellite taking place every Sunday until 16 November.

Buy-in directly or qualify for your entry online at any of the participating iPoker Network sites which include the popular WinnerPoker or flagship site TitanPoker.

Winners of the satellites are required to play the MADchester Poker Open 2014 as the prize cannot be transfer to other players and there is no option for the cash alternative.

Players are also responsible for arranging their own travel and accommodation as the prize only includes entry into the MADchester Poker Open 2014.