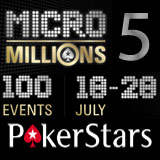 PokerStars MicroMillions tournaments runs daily between 18-28 July at all hours of the day, the Main Event guarantees a million prize pool.

Satellites are also available for all the guaranteed poker tournaments in the series which features a variety of different game types and tournament formats.

The 5th edition of the PokerStars MicroMillions takes place this July with 100 action packed tournaments for Micro Stakes Poker players.

Because of the amount of players registered and size of the prize pools, the events offer great value to players of any stake level especially the Main Event.

Download PokerStars - get a 100% first deposit bonus up t0 $600, join the biggest online poker site and play for your share of the millions.

The MicroMillions series is an affordable poker tournament series at PokerStars which has low buy-ins ranging from just $0.11 up to $22 and guaranteed prize pools up to a million dollars.

Guaranteed poker tournaments have a fixed prize pool amount that PokerStars will overlay in each tournament regardless of how many players are registered for the event.

If the amount of buy-ins, re-buys or addons exceed the guarantee the prize pool will increase accordingly.

On top of the guaranteed prize pools, MicroMillions event winners will also receive a limited edition MicroMillions Champion hat, there will also be a leaderboard running for Player of the Series where players can win WCOOP tournament tickets.