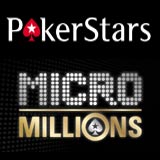 MicroMillions 7 Series - The biggest micro stakes poker tournament series returns for the 7th edition promising more than $5 million in guaranteed prize pools. The series is scheduled from 13th-23rd March with 100 tournaments with buy-ins starting from $0.11 up to $22 for the Main Event.

Players can get free tournament tickets included with their first deposit of at least $20 at PokerStars. First depositors will get:

To qualify for this special offer deposit using the PokerStars bonus code: FREE20

The series consists of low buy-ins and decent guarantees to add even more value to your 2014 poker calender.

Players can buy-in directly to each tournament using the cash in their bankroll or with tournament tickets won from the daily satellites.

Visit PokerStars.com for the full tournament schedule of the MicroMillions 7 series and promotions.

MicroMillions 7 Player of the Series Leaderboard

The series also features a Player of the Series leaderboard where the top 100 players will win tournament tickets to the PokerStars Sunday Million.

If you have not yet joined PokerStars the largest online poker site now would be the best time. First depositors will get the best deal when making a minimum deposit of $20.

For just $20 players will receive an extra $20 freeplay, access to the 100K Privilege Freerolls and the special MicroMillions 7 Ticket Bundle worth $16.

Use the PokerStars bonus code on the deposit screen when making a first deposit before the 23rd March 2014.

The PokerStars MicroMillions 7 ticket bundle is issued instantly to players that make their first deposit, the bundle consists of:

Depositors will receive their MicroMillions 7 tournament tickets and 100K Privilege Freerolls ticket instantly after making a first deposit. The $20 freeplay bonus will be issued within 36 hrs of depositing.

Visit PokerStars.com to get this special offer for new players making their first deposit.