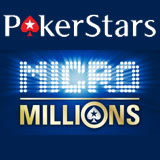 See the MicroMillions schedule for the biggest micro-stakes PokerStars tournaments which run until Sunday 30th July, 2017.

Don't miss out on the million guaranteed MicroMillions Main Event which has a low buy-in of only $22.

The series featured 129 online poker tournaments and ends this weekend with the Main Event of the MicroMillions 13 series.

Signup as a new player and get up to $600 as a welcome bonus on your first deposit. You can also win you share of $10 million dollars in the new Stars Rewards Program.

The MicroMillions series runs from July 16-31 with a selection of 129 micro-stakes online poker tournaments online at PokerStars.

Download PokerStars - signup and get up to $600 welcome bonus with your first deposit.