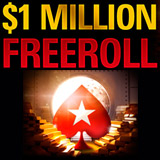 The Million Freeroll tournament takes place at PokerStars on this Sunday the 9th October, 2016, don't miss out on your chance to play for your share of a million dollars.

There are several ways for players to qualify for one of the biggest free poker tournaments in history, simply complete challenges to play the qualifiers tournaments.

The winner of the tournament will win $10,000 for a first place finish in this massive event, it doesn't get bigger than this!

Here's your chance to play for a million dollar guaranteed prize pool for free in the Million Freeroll tournament on PokerStars this Sunday.

This is the biggest free poker tournament you'll find online and it's available to all players that have made at least one deposit at PokerStars.

Download PokerStars - signup as a new player, you'll need to make a deposit of at least $10 to start playing the qualifier tournaments.

How to Qualify for the Million Freeroll Tournament PokerStars

First you'll need to be a real money player at PokerStars and make the minimum first deposit of at least $10, and then opt-in and complete a simple PokerStars challenge.

Players can then win their seat to the million freeroll tournament by playing the daily All-in Shootout qualifier tournaments which run until 6th October, 2016. (no poker skills required)

If you miss out on the All-in Shootout qualifiers, you'll have one more chance to get your entry by playing the Last Chance Skill Qualifier tournament which takes place on Saturday, 8th October, 2016.

Players are required to complete the PokerStars challenge on 7th October and then register and play the Last Chance Skill Qualifier to get their entry.