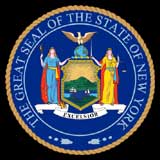 The bill is exclusively for online poker cash games and tournaments with 15% tax on players revenue. The New York Online Poker Bill will include a bad actor clause preventing poker sites that operated in the US after 31st December 2006 from qualifying for a license.

This is bad news for PokerStars and may affect their chances of getting into the Big Apple intrastate poker list of regulated poker rooms. Unregulated poker sites are will soon be liable for taxes and penalties

The population of New York is similar to New Jersey which is proving to be a success with several poker sites: PartyPoker, 888Poker, WSOP and Ultimate Poker.

John Bonacic introduced the New York Online Poker Bill to the Senate Committee this week with the hopes to regulate online poker with a 15% tax rate.

New York may join the list of states which offer regulated online poker and have consider sharing player pools with other states.

No doubt we'll see a PartyPoker NY, 888Poker NY and Ultimate Poker for New York poker players in the near future. PokerStars will be taking the back seat in New York and are going to be disqualified due to the bad factor clause in the New York Online Poker Bill.

Yet again PokerStars are prevented from entering a USA state and have be penalized for allowing USA poker players to play poker online after the UIGEA was introduced in 2006.

The New York Online Poker Bill will offer ten licenses to operate for ten years to selected poker sites who are approved by the commission. The poker license is also open to other products which could include: Online Casino and Sportsbook.

If approved by the Senate Committee the New York Online Poker legislation will change and become one of the most successful states to offer regulated poker online.

Last week Lindsey Graham introduced the Restoration of America's Wire Act to congress, the new act plans to outlaw all forms of online gambling on a federal level.

Backed by Sheldon Adelson, Las Vegas Sands Casino CEO who is willing to spend whatever it takes to prevent his brick and mortar casino losing business to a regulated online poker industry.