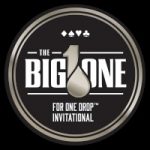 The One Drop Extravaganza Monte-Carlo 2016 is officially the biggest live poker tournament buy-in in history at a million euro per entry with 10% going to OneDrop charity.

This year the event is not open to poker professionals and exclusively for rich businessmen although they are allow a pro to help coach them at the table.

For instance Guy Laliberté has hired the skills of last years runner-up Daniel Negreanu to coach him throughout the event.

The confirmed line-up has been kept a secret until now, although rumors and appearances of possible players are: Dan Shak, Paul Newey, Talal Shakerchi, Haralabos Voulgaris and Andrew Pantling.

Exclusively for invited businessmen the event allows unlimited re-entries on the first day on top of the initial million euro buy-in. Only recreational players who don't rely on poker as their income are allowed to participate in the One Drop Extravaganza Monte-Carlo 2016.

The charity poker tournament raised $3,111,108 for the One Drop charity organization with 10% of all buy-ins going towards making water accessible to those without.

The 2016 One Drop tournament started with 22 players seats on three tables, more players are expected to join the action as the day progresses.