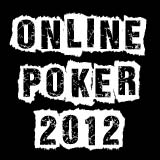 Online Poker in 2012 has had it's ups and downs, one of the highlights of the year would be PokerStars bailing out Full Tilt Poker. The Full Tilt Poker relaunch restored player confidence in online poker and reunited most players with their bankrolls.

Mobile Poker has also been a new popular choice for players, with mobile poker apps being released by most of the top online poker sites including 888Poker, PokerStars and Bwin Poker.

The return of Full Tilt Poker played a huge role in restoring players' confidence, players could finally withdraw their funds for the first time since Black Friday. The sale of Full Tilt Poker to their competitors PokerStars was a strategic move which lifted the negative image associated with the brand.

PokerScout, the leading source for online poker traffic, released the latest statistics on Full Tilt Poker since it's relaunch:

"The relaunch of Full Tilt Poker has brought many players back into the online poker market. Nevertheless, the total worldwide market continues to feel the effects of a tough regulatory environment and a global stagnation in poker's popularity.

Full Tilt Poker fell another 19% last week, continuing its steep decline from the relaunch four weeks ago. Traffic is down some 55% from the post-relaunch high, but the site may be showing signs of bottoming out. The last four days have established a plateau around 4800-4900 players, but it remains to be seen whether the site can hold at this level." - Source: PokerScout

Many online poker sites have tried to keep up with the latest poker trends and technology, one of these trends includes fast fold poker games. Originally released as Rush Poker by Full Tilt Poker the new action packed game was enjoyed by many players because it allowed players to play more poker hands with less waiting time between hands.

Making online poker accessible to every available platform is a necessity in the poker industry, mobile poker apps allow players to play poker anywhere, anytime! Here are some of the mobile poker apps which players can download for their Android phone or tablet, iPad or iPhone.

Play poker on your mobile device at 888Poker, PokerStars or BwinPoker.